Why is “Market Presence” a critical issue to be addressed?
Explanation of the reason and background

As a large automotive market shifts overseas going forward, production and sales at each business location must be conducted for products that respond to the demands of each country and region. Furthermore, there will be no growth if business activities are not conducted in line with the unique cultures and customs of each country and region. For this reason, we recognize the importance of employing employees from the region of business locations, promoting these employees to management positions, conducting business activities, and producing economic benefits in these regions.

In the tire business, we will increase production capacity to 89 million units by 2020, and in the MB business we will expand automotive parts and marine products on a global level.
To this end, we will conduct employment in the countries and regions where business locations are located, promote theses employees to management positions, rotate these employees on a global level, and conduct training programs to accumulate knowledge.

The salaries for operations for local employees at overseas business locations are set in consideration of the wage provisions set by law in that country and region. In addition, a salary system has been developed based on skills improvements and position assignments.

China is a country composed of 56 ethnic groups. The Han Chinese account for 92% of the population, and the remaining groups are referred to as “minority groups”.
In addition to not discriminating based on gender in hiring practices as a matter of course, there is also no discrimination regarding minority groups.
Among a total of 220 employees, eight are Japanese, and local staff are responsible for 20 management positions. Women account for 11 (55%) of these management positions.

Indonesia is a multi-ethnic country, and cultures and traditions differ depending on the ethnic group.
The country was established with the spirit of everyone coming together in unity while respecting diverse environments and cultures.
We also respect this spirit, and we conduct hiring activities that are in compliance with laws related to race, gender, religion, child labor, etc.
Among a total of 132 employees, three are Japanese, and local staff are responsible for eight of ten management positions, two of which are accounted for by women (25%). 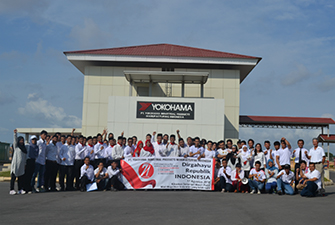 Celebrating Independence Day (YI-ID)
Together with the expansion of operations at business locations overseas, we will instill the Action Guidelines among employees newly joining the Yokohama Rubber Group. In addition, the establishment of a structure that makes cooperative activities aimed at the resolution of social problems that communities face is an issue, in addition to the economic effect associated with business activities.